Challenge Details:
This challenge can be on any Alien Jim map.

Start on Farm Manager
Not allowed to start by buying any of the pre-existing farms; except you can start on originating farm on Mercury Farms map. Must build a farm from scratch somewhere on the map. However, you can buy an in-game farm as a satellite farm if desired after you have fulfilled the starting criteria. Can use any mod providing they are from the mod hub and released for both PC & Console.

The only mods not permitted is anything script-changing such as government signs or tax signs. Buy anything silos are also not permitted. However multi larger silos and the seed/fertilizer huts from the MF Shed Pack are permitted.

All are permitted - DLC's, Seasons, Precision Farming, Logging, Contracts & Borrow Items (No Leasing Allowed), and Loans (must be paid back before completing the challenge).

Permitted to use the map perks such as fuel buying/selling and greenhouses but only allowed to do so once every (3) in-game days.

Must finish with:
Animal Pens - must finish with having (2) full animal pastures
Due to the scope of the maps; at least half of the pens filled and must have sold at least (2) loads of product from either animal (manure, milk, slurry, or other).
5 million in the bank.
Have (3) fields (not including grass fields) and have harvested at least 7 times with different crops. 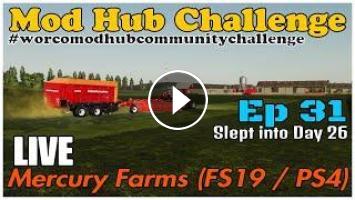